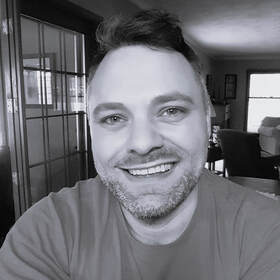 Albert Donze is pleased to continue his second season with the wonderful artists of the Cleveland Chamber Choir. Albert is a private and institutional music educator and is passionate about sharing vocal science to elevate the experience and proficiency of his students. Albert has Bachelor of Music Education and Bachelor of Music in Applied Voice Performance degrees from Ohio State University. He also holds a Master of Music degree in Classical Voice Performance and Pedagogy from Sam Houston State University. Among his numerous vocal instructors are renowned Metropolitan Opera baritone Mark Oswald.
Albert has taught in several public school systems, notably the Akron School for the Arts; Firestone High School; as well as several undergraduate voice programs in Texas, New York City, and Ohio. Albert has been teaching voice since 2004, when he was first licensed to teach K-12 music in Ohio. He has trained artists auditioning for post-secondary programs, and has served as vocal director for cruise ship productions and off-Broadway. He has also taught established performers and other music educators about the free voice. Albert loves teaching students of all ages, and uses tools like expressive games, imagery, and Dalcrose Eurythmics in his teaching.
​Albert’s performing experiences include solo and choral contract work for regional opera companies and concert engagements, including famous venues like Lincoln Center and Carnegie Hall, as well as many sacred service performances. He has appeared on stage in leading roles since he was 11 years old. Recent performances include singing with Jim’s Little Big Band in Strongsville, in sacred services at Saint John's Episcopal Church in Massillon, and with the Cleveland Chamber Choir.
Copyright © 2019
email clevelandchamberchoir@gmail.com